← What are we learning? What have we learned? 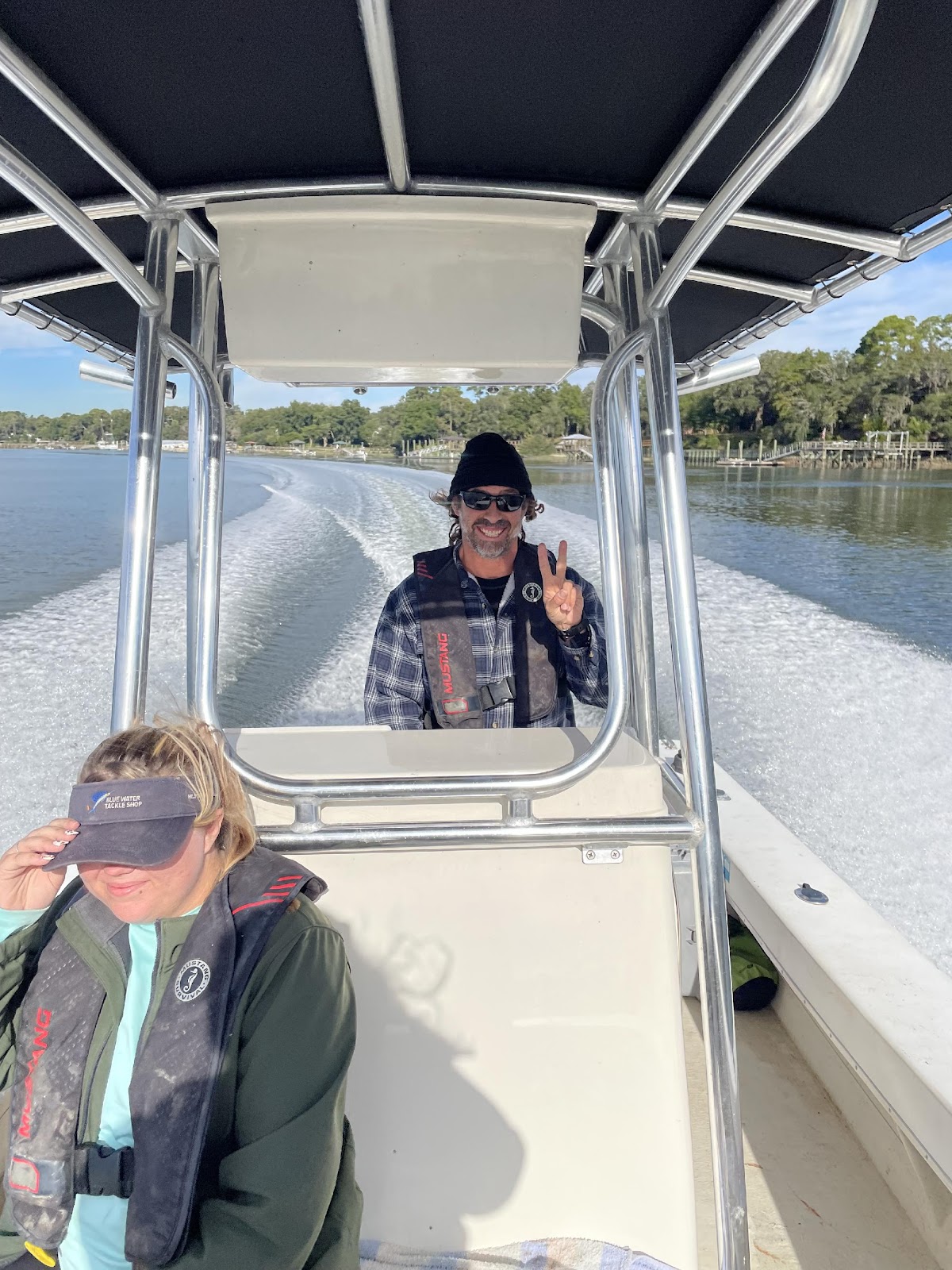 Dr. Eric Montie is the Director of the Marine Sensory and Neurobiology Lab and The Lowcountry Dolphin Conservation Program. He earned a BS in Zoology at the University of Rhode Island in 1993, and then embarked upon post-baccalaureate studies in Biochemistry at Harvard University. He received a MS degree in Environmental Toxicology at Clemson University in 1999, then worked from 1999 to 2000 as a marine mammal field biologist at the National Ocean Service in Charleston, SC. Dr. Montie completed his PhD in September 2006 in the Massachusetts Institute of Technology / Woods Hole Oceanographic Institution Joint Program in Biological Oceanography. He accepted a faculty position at the University of South Carolina Beaufort in 2011, where he now is an Associate Professor. He is also an adjunct faculty member in the Graduate Program in Marine Biology at the College of Charleston, where he mentors graduate students. Prof. Montie has made significant scientific and research contributions in the field of marine bioacoustics and has built a strong research program in soundscape ecology of marine ecosystems. In 2013, he was selected as a Breakthrough Rising Star (15 selected of 2000 faculty throughout the USC System). In May 2021, he was the recipient of the Governor’s Award for Excellence in Scientific Research at a Predominately Undergraduate Institution. At USCB, Dr. Montie teaches Fish Biology, Marine Mammal Biology, Neurobiology, and Biological Principles II. 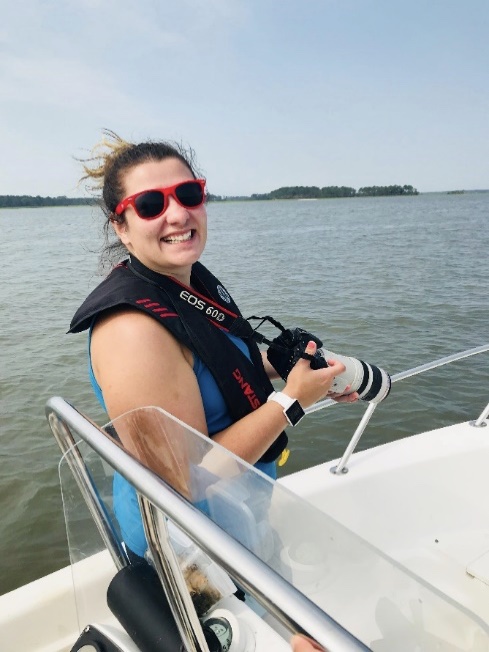 Alyssa Marian is the lab manager of the Marine Sensory and Neurobiology Lab and Lowcountry Dolphin Conservation Program. She obtained her bachelor’s degree in biology from Nebraska Wesleyan University before attending CofC and joining the lab at USCB in 2017. She completed her master’s in marine biology in 2020 with a focus on baseline acoustic behavior, abundance, and distribution of dolphins in the May River. Alyssa is currently in charge of all lab and field work including driving boats, conducting dolphin photo-ID surveys and maintaining the photo-ID catalog, as well as collection and analysis of passive acoustic data associated with ESONS. This is done with the help of multiple graduate and undergraduate students, which she assists in mentoring. 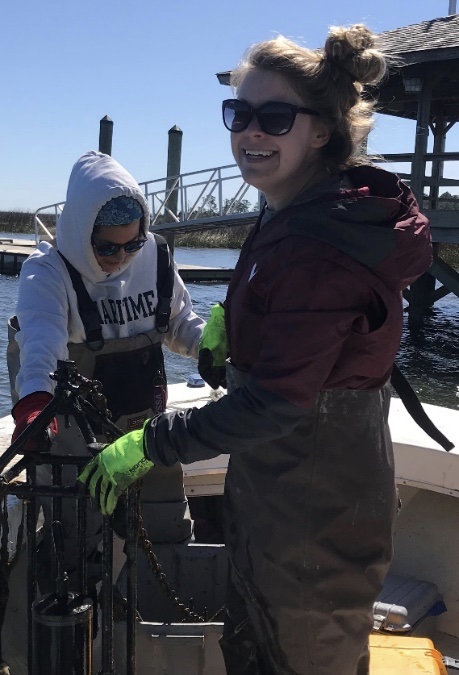 Lindsey Transue is a marine biology graduate student at the College of Charleston. She obtained her bachelor’s degrees in both kinesiology and EEB (ecology and evolutionary biology) at the University of Tennessee in 2016. Before joining the lab, Lindsey worked as a scuba diver at Ripley’s Aquarium of the Smokies and as a laboratory technician at Oak Ridge National Lab. Currently, Lindsey is using passive acoustics to study soundscape patterns in Charleston Harbor and Port Royal Sound for her thesis project. A soundscape includes the biological, physical, and human-made sounds in an ecosystem. The biological sound producers in SC estuaries are bottlenose dolphins, snapping shrimp, and fish such as spotted sea trout and red drum, and patterns of biological sound can be used to learn about animal behavior, habitat quality, and community structure. Lindsey’s project will explore these patterns and then compare them to diversity measures collected through traditional metrics by the SC Department of Natural Resources (SCDNR) to see if passive acoustics could provide an alternative method of tracking biodiversity in local estuaries. 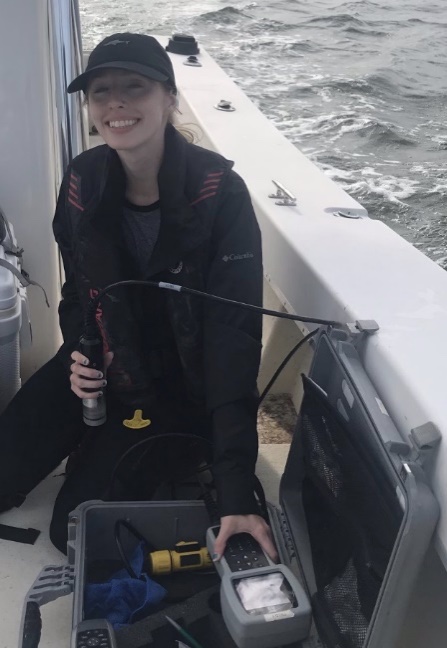 Caroline Tribble is a graduate student at the College of Charleston in the marine biology master’s program. She graduated from Virginia Tech with a bachelor’s degree in biology in 2017. During her time at Virginia Tech, Caroline became interested in marine wildlife conservation and applied to marine science focused REUs all over the country. She was accepted to a summer REU with University of Washington where she assisted with research aimed at determining foraging site preference of the Bristol Bay, AK beluga whale population using active acoustics and satellite telemetry. This experience influenced her interests in the potential negative effects underwater noise pollution may have on marine mammal communication, navigation, and prey detection. After graduation, Caroline worked as a research assistant at the Naval Medical Research Center on enteric disease related vaccine development to save up while she researched graduate school opportunities in marine science. For her master’s thesis, Caroline is using passive acoustics to identify temporal, spatial, environmental, and anthropogenic patterns that may be influencing the Atlantic bottlenose dolphin acoustic repertoire in the Charleston Harbor. In addition, she will also be comparing vocalization patterns of dolphins from the highly industrialized Charleston Harbor to a reference habitat, the May River. 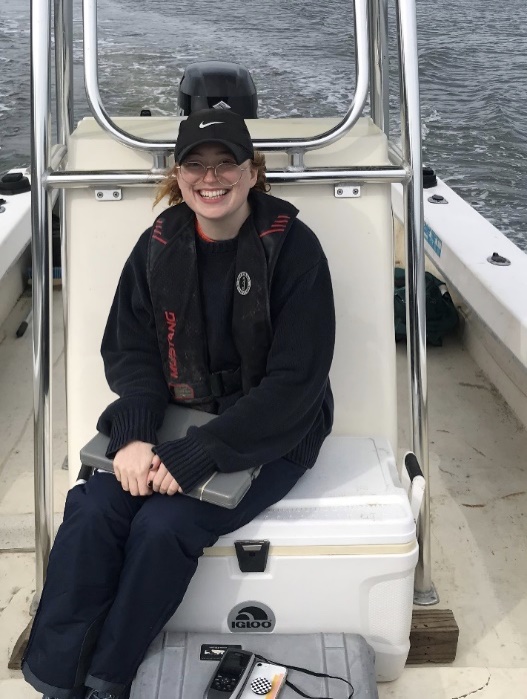 Anneau Cappelmann is an undergraduate student in Biology at the University of South Carolina Beaufort focusing on the study of ecology and coastal conservation. She is a directed studies student in the Marine Sensory and Neurobiology Lab. Currently, she is collaborating with lab manager, Alyssa Marian, and graduate students, Lindsey Transue and Caroline Tribble from the College of Charleston, to perform bottlenose dolphin surveys, as well as deploy and retrieve passive acoustic recorders. Additionally, she is reviewing cryptic biological and anthropogenic sounds from South Carolina estuaries collected by the lab from 2013 - 2021. The goal is to organize the unidentified sounds into a numerical identification catalog. She hopes to identify the organisms and anthropogenic sources responsible for sounds previously marked as unknown to expand the lab’s bioacoustic catalog. 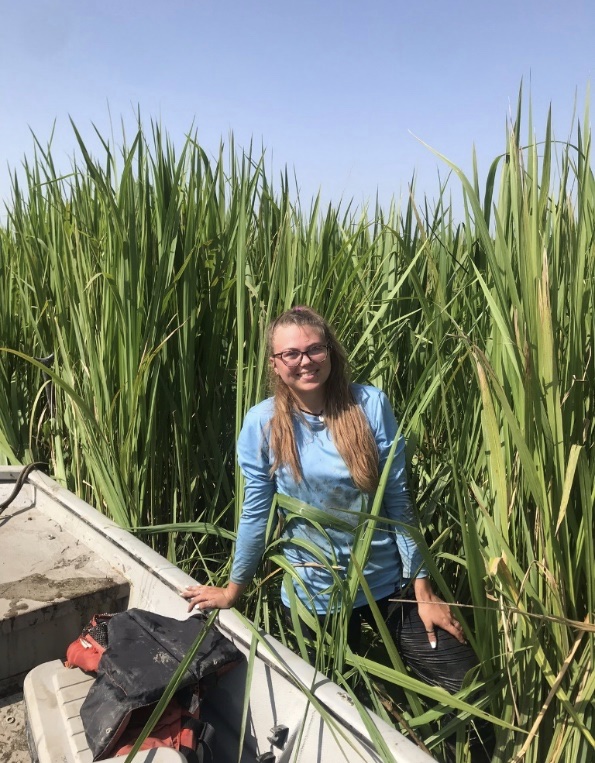 Taylor Morton is an undergraduate student studying Biology with a focus in Marine Biology at the University of South Carolina Beaufort. Taylor's interest in field research was sparked when she won the Earthwatch Ignite Fellowship Award and was invited to participate in Sam Houston State University's research on the endangered Whooping Crane. She also has hands-on experience rehabilitating marine mammals, mainly pinnipeds, at the Marine Mammal Care Center of Los Angeles. Taylor is currently a directed studies student in the Marine Sensory and Neurobiology Lab. Her roles in the lab include helping other lab members with data entry, dolphin surveys, photo identification of bottlenose dolphins, and the deployment/retrieval of passive acoustic recorders. Taylor will soon start a small pilot study to acquire signature whistles of bottlenose dolphins using SNAP recorders to attempt to find these whistles in our passive acoustic dataset. 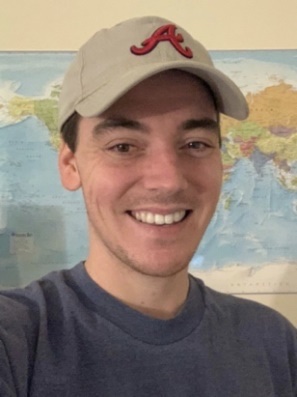 Ian Deery is the newest member of Marine Sensory and Neurobiology Lab. He is an undergraduate student at the University of South Carolina Beaufort where he’s studying biology with a concentration in coastal ecology and conservation. Ian joined the lab through USCB’s Directed Studies in Biology course during the Fall 2021 Semester. His primary duties in the lab involve reviewing acoustic data, but he will also assist the other members of the lab with the deployment and retrieval of acoustic recorders and with performing bottlenose dolphin surveys and data analysis. 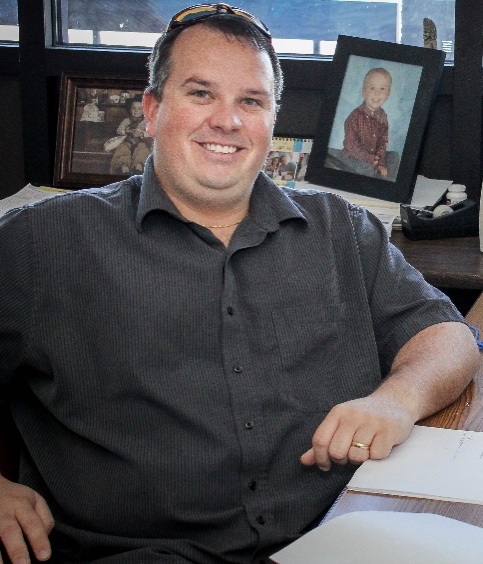 Dr. Joseph (Joey) Ballenger is the Manager of the SCDNR Inshore Fisheries Monitoring Program. He earned a B.S. degree in Biology from Winthrop University, a M.S. degree in Fisheries & Allied Aquaculture from Auburn University, and a Ph.D. in Oceanography from Old Dominion University. Dr. Ballenger has been an Associate Scientist at the South Carolina Department of Natural Resources since 2009, where he currently oversees several fishery-independent monitoring programs targeting estuarine finfish (e.g., Red Drum, Spotted Seatrout, Southern Flounder, Sheepshead, etc.) and coastal sharks (e.g., Bonnethead, Blacktip, Blacknose, Bull, Carolina/Scalloped Hammerhead, Tiger, etc.). His team is focused on collecting timely fishery-independent data on the status and life history of various species to allow for science-based management decisions, with a particular focus on applied research addressing specific recognized research needs to decrease the uncertainty in the assessment of stock status. Dr. Ballenger regularly participates on state and regional technical work groups (e.g., technical committees, expert working groups, stock assessment committees, etc.) sponsored by the SCDNR, ASFMC, and SAFMC and he is also an adjunct faculty member at the College of Charleston where he supports the program by mentoring graduate students in the Grice Program of Marine Biology and teaches an “Introduction to Fisheries Science” course. Dr. Ballenger is collaborating with our ESONS project funded by NOAA IOOS/SECOORA through an integration of fishery-independent data for comparisons to soundscape metrics. 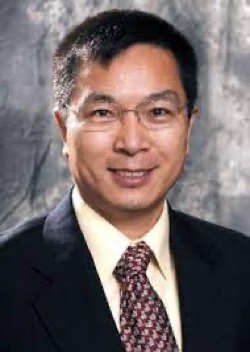 Dr. Yiming Ji is a Professor and Chair in the Department of Information Technology at Georgia Southern University. Prior to joining Georgia Southern, Dr. Ji also served as the Department Chair of Computer Science at the University of South Carolina Beaufort (USCB). Dr. Ji teaches undergraduate and graduate courses in Computer and Computational Science, Computational Engineering, and Information Science and Technology. His areas of scholarly interest include wireless communications and computer networks, modeling and simulation, scientific computing, and digital signal processing. In this project, Dr. Ji is focused on creating computational software geared towards obtaining soundscape endpoints.

← What are we learning? What have we learned?